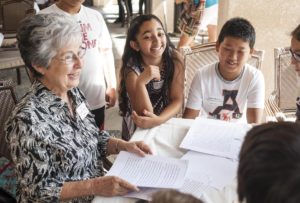 “My dad was in the Navy, so he was gone all the time,” Rice, 85, shares of her life as a child with a father in World War II. “We had no television … no video games.”

The resident of the Morningside of Fullerton retirement community sat at the head of a table talking about growing up during the Great Depression – hoping for just one Christmas present, a pair of roller skates – and the following war years for four Laguna Road Elementary fifth-graders who know nothing of either except what they’ve read in their textbooks.

Rice’s story and others recorded Friday by the tech-savvy students will be produced into digital biographies as part of the Fullerton School District’s new Story Angels program.

The students are using Adobe Spark to edit the footage with old photographs. In November, the children will return to Morningside for a screening of the completed multimedia projects.

“The curriculum is designed to get these kids communicating with someone from a different generation, to take their words and make them into a story,” said Pam Chow, project liaison with the superintendent’s office. “And the byproduct of this is the connections made between the students and the seniors.”

The school has 100 students participating, grouped in quartets with residents of the retirement community.

“There’s a lot of joy, a lot of enrichment, and not only for the children, but for our seniors,” said Diana Blidy, Morningside community life and services director. “They love seeing the look on the children’s faces when they tell their story and when the children say it back.

“Those (seniors) participating had been talking about this day for months.”

The students previously interviewed their seniors, taking notes and writing biographies in class.

Let her group tell it, and Patsy Zima slept in a barn with her pet goat. She set the record straight when her interviewers returned to Morningside on Friday with follow-up questions.

“What did you have to give up during the Great Depression?” students asked their subjects. “After you were drafted, what did you do before you had to leave for Korea?”

“What are War Dogs?”

Vi Barrett, 87, told her group about being the first female radio dispatcher in Los Angeles’ FBI office. She showed the students a photo of herself taken in the 1940s, sitting at her desk with a typewriter in the background, a gooseneck microphone and a rotary telephone.

“I want these kids to realize they can go apply for anything that they think they can have fun doing,” she said.

Virginia White, 86, walked into the Catalina Club at Morningside with four students prepared to record her story.

The students set up their iPads to capture her from different angles as she read about a trip she and her son took to the Colorado rapids 41 years ago.

“These children are showing empathy with older people as we tell them stories about what happened to us in our lives,” White said. “They’re learning the ability to talk to older people. Very bright children.”

Sophia Lopez, 10, was one of the students who interviewed Rice. Harder than recording and editing a digital biography, Sophia said, was coming up with questions and writing a script to be read on camera.

“We learned how impactful these moments were in their lives, and why we should be grateful for things we have,” said Alana Alvarado, 10, who wrote her biography on Joan Ditmore, who spoke about her time helping refugee children in Africa. “There are life lessons we can learn from these senior citizens.”

Preserving your life story is important...
Because one day, someone who matters will thank you.
CONTACT US